This proliferation of methodologies yields better, more refined and improved user research data. However, with a growing proliferation of methodologies, it can become rather unwieldy trying to find the context of usage for a particular methodology. To make this easier to work with and cherry-pick a methodology easily, I prefer to categorise UX methodologies so I have a much better idea of its context of use. The categorisation is based on the stage of a product design life cycle they fall under. To begin with, there is the ‘Discovery’ stage when a product hasn’t been designed and research needs to get started, the ‘Design’ stage when a product is in the process of being created and the ‘Iteration’ stage when a product has completed development and is being improved. This is by no means a hard categorisation where methodologies belonging to one stage can’t be used in another and only serves as a guide that indicates in which stage which methodology would be most effective.

This category covers methodologies that are generally used at the start of a product lifecycle. The goals during this phase are centred primarily around discovering the persona archetypes a product intends to target. This is usually the first stage when little is known about the target personas and preferably before any product design commences. Some of the best methodologies used in this stage are:

This research builds a granular level of data as well as empathy for their lives. It will give you vital clues on best practices to gain new customers as well as keeping them engaged. You can find ways to fit your product into a users life rather than the other way around.

With the proliferation of survey creation tools, surveys are one of the most effective and easy ways to get feedback. It can give quantitatively richer data but doesn’t answer the ‘why’ as well as user interviews can. One of the biggest sore points is getting users to actually complete surveys in our media-saturated world but if this is done effectively can create a rich set of data that works very well with data obtained from user interviews.

User interviews are more involved than surveys and seek to discover pain points through teasing out answers. Doing interviews well takes practice as you better understand how reframing questions can give you completely different results leading to many false positives. This is why it’s always a good practice to not use the data from user interviews in isolation but with other research data including immersion, user testing, analytics and surveys. However, it can yield a surprising more detailed level of insight than just surveys alone.

Empathy maps are effective tools to discover a more holistic experience of a user. This tool is best utilised in workshops with stakeholders who communicate directly with their target users as well as other stakeholders who don’t. It helps develop a greater sense of empathy among stakeholders who are not in touch with these users and the data from the map and is a perfect cross-reference against data obtained from other research methods including immersion and user interviews.

A persona is an archetype of a user you’re intending to design your product for. It summarises the data discovered through immersion, empathy maps and user interviews. A persona can have many types of details. The most common types include a Bio / Story, goals, frustrations and in some cases more granular level of details including their typical day and even a Myers Briggs profile. The level of detail really depends on the product. A persona archetype is one of the best tools to leverage for product design as it summarises the learnings that have been discovered through other methodologies. The design is where research data has been gathered post the discovery phase. This is the phase when all the synthesis can begin and various persona archetypes and models of usability start to emerge which can then be used as the foundation for product design.

Card sorting is a user-driven classification of information into categories. This methodology can be open, where users create their own product categories using cards or closed where they organise content into existing categories. The resulting artifact ends up in defining what the Product information architecture would look like. This methodology is optional and I have mostly used it only with products where the navigation is complicated and deep.

Storyboards are a sequence of low fidelity images that are used to evaluate a user’s journey and conveys events and flows based on a real-life experience of a product. It seeks to discover how a goal could be accomplished with minimal friction through the process.

Prototyping in itself is a broad subject because of the varying levels of prototypes from low to high fidelity that you can create. The preferred way and something I tend to prefer is to start at a very low fidelity with actual sketching on paper. There are multiple reasons for this. It allows you to present your work early and get feedback and evaluate blind spots early on before you get emotionally attached to a design and let bias take over your work. This results in multiple iterative improvements to the design till a sketch that meets all user pain points emerges. Once the design has been created it progressively moves to a higher def prototype in the form of wireframes. Wireframes bring a greater degree of fidelity while the visual hierarchy and the relation of elements in the design with each other become clearer. The advantages about wireframes are they keep contentious and subjective topics like colour out of a feedback discussion till more important patterns like flow and functionality are established. The only reason for skipping a wireframe stage and going to a high fidelity prototype is if there is an already established design system which can be used to directly create full high fidelity prototypes for. Once at a high fidelity prototype stage, early user testing can start to yield valuable feedback for improvement prior to developing the product.

Early stage user testing is an invaluable part of the product UX process. It creates a self-checking mechanism that helps to eliminate poor ideas and blind spots. The gradual iteration over many stages over increasingly wider testing circles and over different prototype definitions from low to high enable a user tested product to emerge that overcomes obvious usability issues prior to release.

Wireflows help to document user workflows and user interactions. They leverage the work done in the wireframing stage to create a document where screens are linked together by arrows to indicate the interactions between them (Eg. a button click that opens another screen). Wireflows can demonstrate interactions much better than a flowchart can. It communicates functionality to team members and is a more concise handover to developers and substitutes many pages of tedious documentation.

A journey map can be used almost anywhere in the design spectrum but is at it’s richest post-discovery phase when the actual pain points are well known. It’s a visual summary of a person’s experience using a product or interacting with a brand over various touch points and over different channels. They allow you to zoom in and inspect a person’s experience through each stage of their journey.

UX Design involves mapping and aligning pains, gains, and context from Personas to the Product pain relievers and services using a Value proposition canvas. This phase allows for rapid and lean prototype design and testing and enables significant cost savings prior to products going through the development phases. 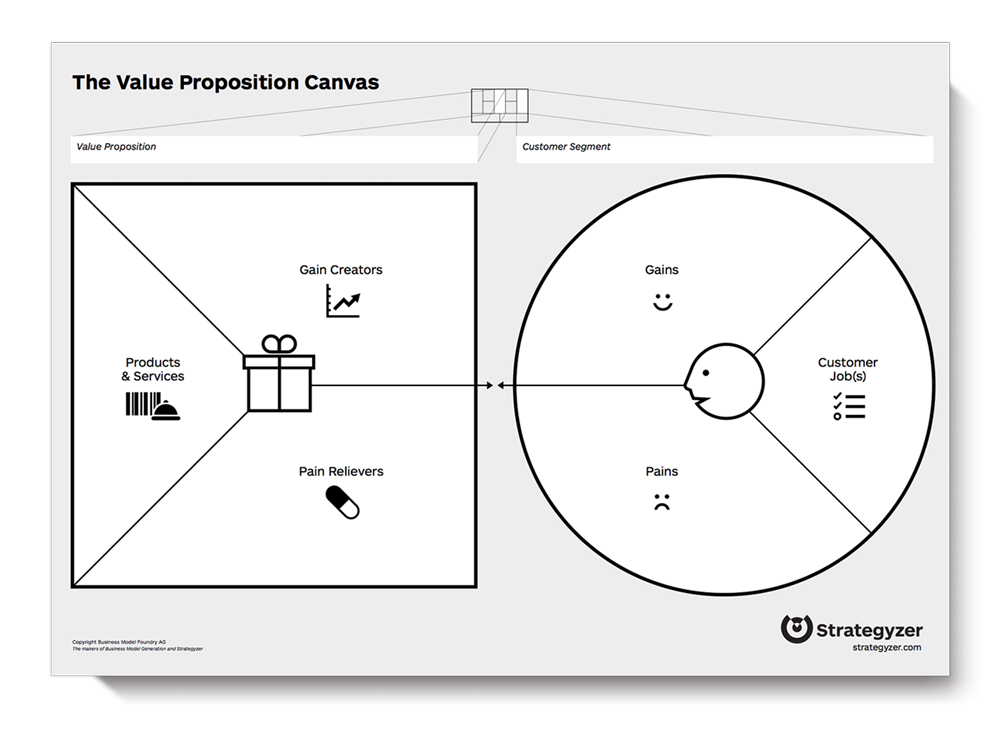 Iteration is a stage post product release. This stage is when a product has already been developed and the goals of the research are to gather insights that can be used for the evolution or improvement of the product post-release.

Web analytics are quantitative and allow you to see the ‘what‘ of a product usage. Tools like Google analytics, Hot Jar and Firebase show a clear picture of usage of a product. Even though this is a valuable piece of data this is not enough to get a clear understanding and needs to evaluated against qualitative methods like user testing.

User testing is qualitative and allows us to see the Why of a user’s experience of a product. User testing involves an In-person usability study wherein a user researcher gets their test personas to complete a number of tasks. The evaluation of the tests allows the user research to conduct an interview while the testing session is on to examine everything to do with the customer journey.

A/B testing is offering two different versions either through form or functionality to see how a user would respond to each version. This results from this testing yields what the best version is and why.

Task analysis is a part of user testing and involves giving a user a series of real-world tasks that they would complete in their daily lives and get them to complete it so you can assess various metrics including time on task, number of mouse clicks / taps, errors, page scrolling, while they complete the tasks. These metrics are recorded for different participants to get some statistically significant data. Once these are derived, clear patterns of usability demonstrate key friction areas in a task journey.

Heuristic analysis is an in-house examination of a completed product to measure and see if it adheres to a bare minimum usability standard. This aims to provide a cover to see if any glaring usability issues were missed during production.

In summary, the context and goals are important in determining the usability methodology. I’ve also only listed the methodologies that have given me the best results. Please feel free to let me know if you find methodologies that are more effective and offer even better results.